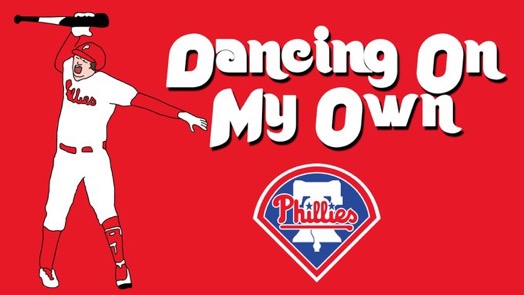 The past two weeks have been an incredibly exciting and emotional time if you’ve been following Philadelphia sports. As the Phillies won the NLCS and moved on to compete in the World Series, fans were constantly caught shouting Calum Scott’s cover of Robyn’s song, “Dancing On My Own,” as a hymn to the citywide to celebrate the team’s success this season. .

Calum Scott wasn’t the only artist to cover Robyn’s original popular song, however. Local Philadelphia band LongFriend TimeFriend with drummer Pete Imbesi, a Rowan University alumnus, created a unique “punk rock cover” of the song. The song was released on October 21 and comes with an animated video on Youtube.

The group is made up of four musicians, who also happen to be two groups of lifelong friends.

“Our guitarist and vocalist Em, they and I have been playing music together since we were twelve or thirteen,” Imbesi said. “We met our freshman in high school and played in a ska-punk band called the Political Party Crashers for about ten years together.”

It was only after the band split up that they were able to forge a new musical collaboration.

“The band broke up a few years ago when we were shortly out of college,” Imbesi said. “We [Imbesi and Em] remained good friends and we both worked on music independently and kind of showed each other our stuff, but we always had the idea that we wanted to start another band.

The band is local to the city and due to the team’s success and the growing popularity of the song, a unique opportunity arose to do a cover. Especially since the sports of Philadelphia have already inspired the group.

“We were doing something where people could pay us to do covers,” Imbesi said. “One of the people who supported us wanted us to do a Philadelphia 76ers cover…their victory song. They have a song called ‘Here Comes the Sixers’ and it’s like an old song disco… It was really well done and it’s something we always love to play live whenever it’s basketball season and we don’t think we’re going to jinx the team.”

The band’s experience and the popularity surrounding the song provided a perfect opportunity to create their own version of the beloved song.

“When the Phillies entered the World Series…they picked ‘Dancing On My Own’ as their victory anthem. We were like ‘it’s amazing, it’s this iconic queer power pop song that’s chosen by this Philadelphia sports team that had nothing to do so far,'” he said. “It just felt like a really great time, kind of a perfect time.”

Although the Phillies lost the series, fans will always have the song as a musical reminder of the magic of the City of Brotherly Love in the weeks leading up to the games. The song was a symbol of how devoted fans were to their team and their hometown. The cover only illustrates how inspiring the song was to Philadelphians.

The band’s cover is a reminder of the fans’ love and dedication to their music and their team, especially given the circumstances in which the song was written. The band created the song in just a few days – wanting to release it for fans before the series ended.

The timeline of the games and these life events only left the band a few days to create the song, the animation, and release it.

“It was part of the mentality, we only have this week to do it…we wanted to get it out before the show,” Imbesi said. “So it was kind of like, ‘Okay, let’s try! Let’s do our best and see what we do and hope it comes to fruition” and luckily it does. »

The song can be heard on Youtube, and their other music, including their album “If Me Dies, Me Dies”, and their split EP with New York band Marinara, “Eagles Court”, can be found on most streaming platforms, like Spotify and Bandcamp .

The band is grateful for the support from Philadelphia fans and encourages people who liked the cover to check out their other music as well.

For questions/comments on this story, email [email protected] or tweet @TheWhitOnline.