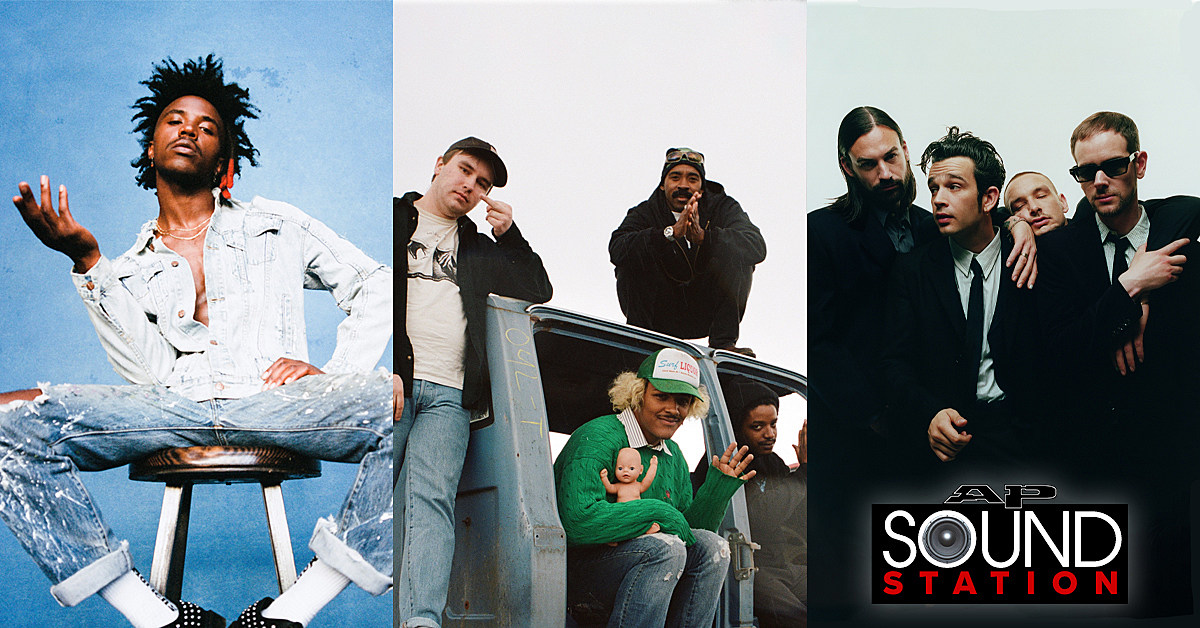 DE’WAYNE, Enumclaw and the 1975 are our tracks of the week

welcome to sound station, where we highlight the best new tracks released this week. Kick off the weekend with songs from DE’WAYNE, Enumclaw and more.

In a powerful convergence of generations through alternative music, DE’WAYNE teamed up with Sweet Charlotte for a stadium-ready anthem titled “TAKE THIS CROWN.” The track centers around an emotive guitar line that accompanies a dynamic and vulnerable vocal performance by DE’WAYNE that is sure to send shivers down your spine. As the tension builds, it gives way to an energetic chorus thanks to Joel Madden. Lyrically, the song is about internal struggles, self-esteem, and learning to be comfortable in your own skin. “TAKE THIS CROWN” is a timely and relatable song that will instantly capture you. —Alessandro De Caro

Enumclaw is bound to endure with “Park Lodge”

By this time next year, Enumclaw will be everywhere. Their songs have a magnet pop charm that revels in vulnerability and exuberance. “Park Lodge” is further proof of this, being their most amazing song to date. Towards the end, the track erupts in a rush of noise that reveals a band with a singular vision. Enumclaw calls the song one of their favoritesand it could soon be yours too. —Neville Hardman

Ahead of their new album Being funny in a foreign language, the 1975 have shared”I am in love with you.“The track is accompanied by a captivating clip filled with clowns that features impressive choreography and an adorable cameo from Phoebe Bridger. Singer Matty Healy also revealed that the video serves as a spiritual sequel to the 2016 visual for “A change of heart,which shows him adorning similar clown makeup against a backdrop of nostalgic black-and-white shots. “I’m In Love With You” sounds like a tribute to 90s alternative music (The treatment, Lemons) with an upbeat vocal hook and acoustic guitar sound. Lyrically, the song offers a simple yet touching profession of love that feels celebratory in more ways than one. —Alessandro DeCaro

YUNGBLUD Channels The 80s With “Tissues”

Sampling The Cure’s 1985 song “Close To Me”, YUNGBLUDThe latest single from “Tissues” is an energetic ’80s-tinged pop banger that sees the rising rock star burst out with unbridled confidence. The dichotomy of the song’s self-deprecating lyrics paired with its up-tempo chorus allows the English singer to show off his best impression of Springsteen – with a bit more guts. Not only is it a mood booster, but it will make you consider revisiting Free from all ties. ––Ilana Kaplan

Quicksand Returns With Hypnotic New Track “Giving The Past Away”

’90 post hardcore pioneers Quicksands have released a new track titled “Give the past.” The song was originally recorded during the sessions for their 2021 record Remote populations but was ultimately cut from the tracklist. Luckily, fans can now bask in the song’s hypnotic vocals, crisp guitar riffs, and intricate time signatures. Sonically, the track feels like a throwback to the band’s classic style on their beloved 1993 album. Underwear with a modern makeover. The production is of course at the next level thanks to the producer and the engineer Yip will he (Turnstile, Turnover), which has an incredible ability to capture the raw essence of a live band. —Alessandro DeCaro

Rhys Langston’s “I Will Stop At Nothing (I Am Magnetized And I Move!)” is insanely good quality

Rhys Langston is committed to excellence. His latest single, “I Will Stop At Nothing (I Am Magnetized And I Move!)”, is a lesson in lo-fi groove (courtesy of producer Orlando Kennedy), charisma and vibrant puns. But you will need several listens to appreciate its dizzying performance, as hypnotic as it is magnetic. We recommend you start now before his new album, Radio Grapefruitreleased on September 14. —Neville Hardman

Turnover are back with another preview of Myself on the way, and this time Bre Morell (Temple of Angels) lends his voice to the hypotonic piece. On “Ain’t Love Heavy,” the band’s panoramic vision is once again shrouded in thick haze as they continue to tinker with synths and pump up their sound. One listen and you’ll feel like you’re covered in hundreds of disco shrapnel when you hit the dance floor. —Neville Hardman

On their self-titled debut EP, Teenagers in difficulty channel seriousness Weezer and Pixies vibes, and the end result couldn’t be more fun. Led by songwriter Lizzie Killian, the four-track release features fuzzy guitars, emotionally raw vocal performances, and lyrics that swing between serious and playful subject matter. standout track “I’m not worriedfeatures an epic music video set in space, featuring everything from cryogenic tanks, asteroids, spaceships and an adorable co-pilot dog. On their debut EP, Teens In Trouble will take you back to 90s glory with a collection of promising songs. —Alessandro DeCaro