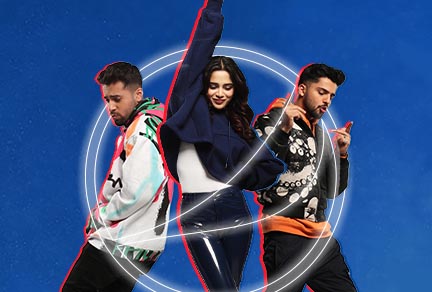 From Aima Baig to Talal Qureshi

CARACHI: Nobody gets more excited than us when Pakistani artists release new tracks because we love our artists’ work! All the upcoming names, such as Faris Shafi, Hasan Raheem, Towers, Maanu, Rizzy Rozeo and Peach Fuzz produce stellar tracks and they are not afraid to collaborate with each other.

That’s precisely why we’ve compiled a list of artists and their songs to watch this month. While there is no shortage of fresh new music coming out of Pakistan right now, this playlist is limited only to dance numbers that can be enjoyed at parties and weddings this year.

This song got us so excited we’re at a loss for words. Anyone can easily tell that some of the freshest minds came together to produce this absolutely smashing dance track. Although the song is incredibly catchy, it was the choreography that stole the show. Kamal Khan, who directed Laal Kabootar, is the creative force behind this video. To watch!

The boys who made it big with their song Filhaal teamed up with Talal Qureshi, Mujju and Maanu to produce this hip-hop track, perfect for rocking on a night out driving around the city.

No music list is complete without Hasan Raheem these days. Over time, Hasan Raheem shows more diversity in terms of sound, but Sun The Na is also a visual treat, with a video featuring artist and actor Adeel Afzal.

You can’t tap into the youth music market if you don’t produce songs with lyrics that young people can relate to. While Faris Shafi’s songs are filled with various profanities that are too offensive for mainstream platforms, they can be listened/watched on YouTube very easily. Faris’ LAFZ has a sick beat, and the lyrics are modern and relevant to the millennial/Gen-Z age group.

Peach Fuzz is a new name that will soon become mainstream. But for now, this band has a more modest reach compared to the other names on this list, but their musical quality and creativity are clearly on par with the others. Sar Phira perfectly illustrates this point. The vocals have an old-school charm, while the music is decidedly modern. We like!

This song is a successful collaboration. All the upcoming players in the music scene have come together to produce this smashing diss track that also has a really fun one-take video.

Rizzy keeps showing off a bit, we agree. But he’s definitely a star in the making, we can’t avoid adding him to this list. To listen Authentic might remind you of the Weeknd – the vibe of the song and the video are definitely similar. But Taha and Rizzy keep their desi roots and we’re happy to hear Urdu in the song (with English lyrics).