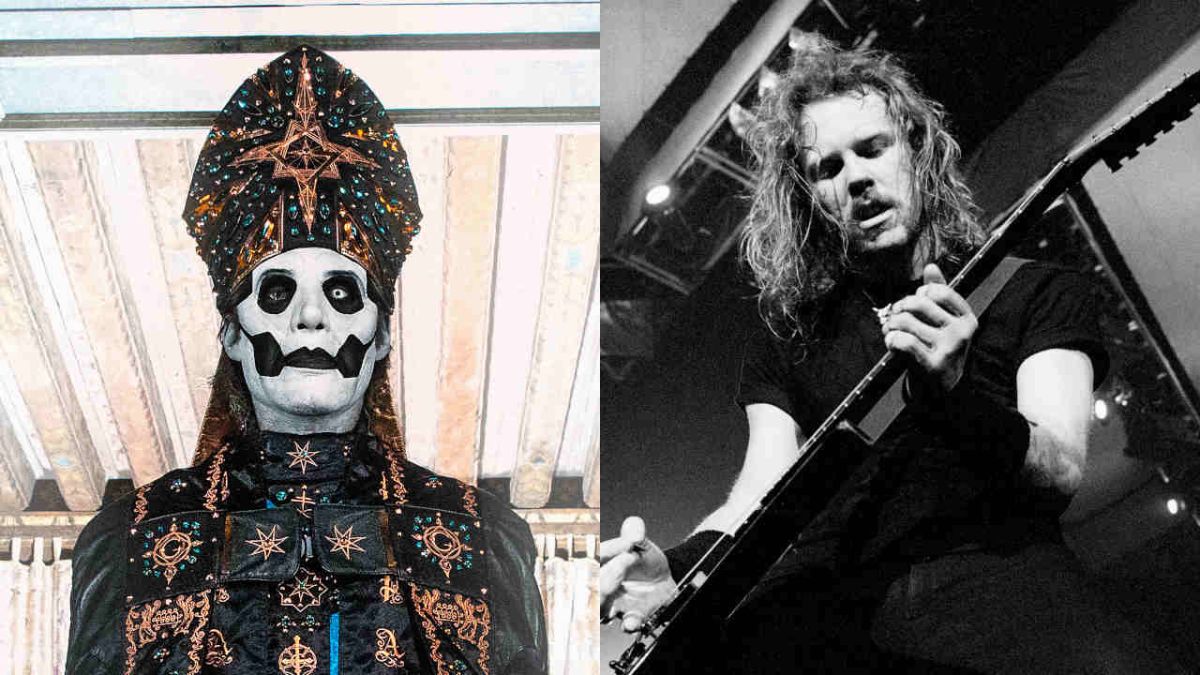 Ghost’s Tobias Forge: “Metallica was the biggest, baddest band of them all!”

There has long been a two-way love between Ghost and Metallica. James Hetfield defended the Swedes from his first album Eponymous album, taking the young group under his wing. Tobias Forge has been equally vocal about Metallica, even covering the Black Album classic Enter Sandman on the recent Blacklist compilation and completing his dream setlist for metal hammer. We caught up with the man behind Papa Emeritus’ mask to ask him about his love of all things ‘Tallica…

How did you end up covering Enter Sandman on Metallica’s Blacklist album?

Tobie Forge: “We were asked to play Enter Sandman when Metallica was at [Swedish awards ceremony] The Polar Prize a few years ago. We were like, ‘Can we choose which song?’ They said, ‘Well, you can choose, but we really want you to do Enter Sandman. If you’re going to open the show, we want you to play their greatest song. So when we talked about this record, it made sense.

How do you approach such a famous song?

“It’s hard to cover such a famous song, but I heard a bit more melody in the chord sequence. So I thought I’d explore that and see if I could turn it into something different – not better, just different. It’s also such a rock’n’roll song – I wanted our version to swing.

Were you nervous doing it at the Polar Prize ceremony?

“Super nervous, because it was right at the beginning of the previous album, Prequelle. So the eyes of our fans and their fans were on us. I was just, like, ‘I hope you dig, but we do this for Metallica.’

When did Metallica come into your life?

“My older brother was a Metallica fan, so they were always around when I was growing up. I actually had a poster of metal hammer on my wall – he had the Jump into the fire demon on it, but with a Puppeteer-image of the time. The Black album is the first album that I clearly remember anticipating, like “It’s coming out in August”.

What was it the black scrapbook who caught you?

“Like most people, Enter Sandman was the first thing I heard. As soon as it came on MTV or on the radio, I just stopped: ‘Here’s that song again.’ It was unique and powerful and just very rocking.

“It was one of the few times in my life when I was in tune with what was happening commercially, especially with what happened with the black metal movement that I was seduced by a little later. There was this great tsunami of huge rock records that came out at that time – Nirvana and Pearl Jam and the Red Hot Chili Peppers But Metallica was the biggest, coolest, baddest band of them all. .

Have you seen them on The black album to visit?

“I’ve seen them a few times. There was always something special about this stage [the Snake Pit]. He had some sort of magical power. But what really blew me away in this period is A year and a half in the life of Metallica Parts 1 and 2 documentary. I’ve seen it over a hundred times. I had probably seen it 60 times before I even went into the studio to record my first demo. It’s become a manual – it’s how you make a record and it’s how you spin it.

What touched so many people outside of the metal world?

“It was the ballads that made the album so successful. Nothing else mattersGuns N’ Roses November Rain…these are the songs that were on the radio. If you went to the school disco, Nothing else matters was the song they played as a slow dance. You associate it with your first kiss or your first romance, especially if you were a teenager. He worked his way into the romantic side of life and attracted girls. It’s the difference between selling two million records and selling 20 million.

You know the Metallica guys these days. What would 15-year-old Tobias Forge have thought?

“Total wonder, of course. I have times when I’ve been on tour with them, or worked with them, where the older, slightly more jaded version of myself gets a little pat on the shoulder from my younger side: “That’s fucking cool!”

If you had to hop on Spotify right now and listen to one song from the Black Album, which would it be?

Ghost is on the cover of Metal Hammer’s brand new issue, out now

Can’t wait to step up your wardrobe game for live gigs? Let Darshan Raval and Dhvani Bhanushali guide you