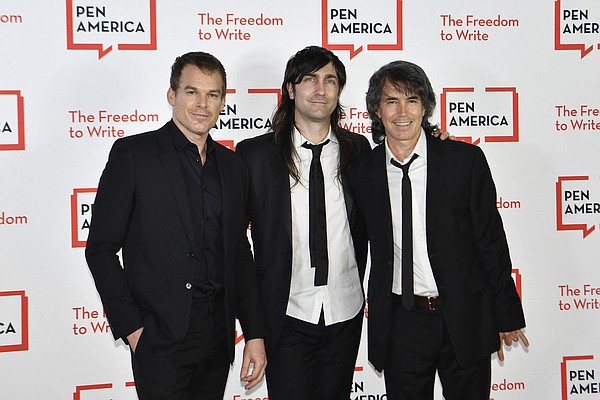 Michael C. Hall knows curiosity is one of the reasons people come to see him perform on the mic with Princess Goes to the Butterfly Museum.

And the ‘Dexter’ star agrees with that.

“I kinda like that people maybe show up with some sort of curiosity or preconceptions and then blow themselves away,” he says. “It’s funny.”

Still, that doesn’t mean fans should approach the Princess singer after a show and say something like, “Wow! That Dexter sure can sing!”

“Well, if they say that, I’ll have to remind them that Dexter doesn’t really exist,” Hall said. “It’s just words on a page.”

Hall seems more concerned with the words that go into the songs these days, as PGTTBM – the trio he leads with keyboardist Matt Katz-Bohen and drummer Peter Yanowitz – is on its first North American tour, which kicked off earlier this month in Pioneertown, Calif. (The tour so far skips Arkansas as well as most of the South. For more, visit the band’s website, princessgoestothebutterflymuseum.com.)

Hall, of course, is the best-known member of the group, having starred not only in Showtime’s original “Dexter” and the recent reboot, but also in HBO’s acclaimed “Six Feet Under.” He also has an impressive Broadway pedigree, having starred in “Cabaret”, https://www.arkansasonline.com/news/2022/mar/27/beyond-dexter-michael-c-halls-rock-band-embarks/ “Chicago” and other hit musicals and plays.

Yet the other two members of PGTTBM also have impressive resumes and are highly regarded in their fields.

Yanowitz rose to fame as the original drummer for Jakob Dylan’s Wallflowers. He then set the pace for Natalie Merchant’s first three solo albums and worked with such notables as Yoko Ono and even legendary Beat Generation poet Allen Ginsberg.

Katz-Bohen has been performing and recording with Blondie for over a decade, having signed with Debbie Harry and Company for the Parallel Lines 30th Anniversary Tour in 2008. He has also worked with Boy George and Cyndi Lauper.

The three artists first crossed paths when Hall played the lead role in “Hedwig and the Angry Inch” on Broadway in 2014-15. Katz-Bohen and Yanowitz were also in the production, swinging behind Hall as members of the fictional band.

“It’s a play about a band playing live,” Yanowitz says of the play. “It was just fun being in a fake group.”

Fiction would later turn into reality when Hall, Katz-Bohen, and Yanowitz began meeting informally and making music as a trio.

“We just kept doing it and doing it without even really thinking about what it was,” Yanowitz says. “Very soon we had 10 songs and we felt like they had their own momentum. We were like, ‘I guess we should think of a name or maybe play a show. It all came to us much later down the road, like, ‘Oh, I guess we’re a band.'”

And so Princess Goes to the Butterfly Museum was born, delivering the first synth-pop dream single “Ketamine” in 2019.

Of course, the band had a lot of different options when it came to deciding what kind of music to make, especially given the varied backgrounds and expertise of the three participants. Yet it seems that the best decision was not at all.

“Fortunately, we didn’t really have to decide. And we still don’t have to decide,” Katz-Bohen says. “It’s not like we’re a genre band. We’re not trying to make one type of music.”

The band members have never even talked about how they want to sound or even what kind of song they want to write, Hall says.

“We just let it happen,” he says. “Whatever chemistry exists when our three sensibilities intersect, that’s what it is.”

However, there is one condition that the music must meet – and it is linked to the name of the group.

“Anyway, it has to fit into our museum concept, which is sort of our aesthetic paradigm,” says Katz-Bohen. “So every time we record something, we’re kind of like, ‘Is this going to the museum? And you’re like, “Yeah, I think it fits in the museum.” “”

The band members have come up with a few terms to describe PGTTBM’s sound – “kaleidoscopic sound weather” and “gothic rocktronic” – which are apparently fun ways of saying that the music draws inspiration from everything from classic glam rock and disco to modern electronic dance music and indie pop.

The swirling mix is ​​on full display on the band’s first full-length album, “Thanks for Coming,” which was released in 2021. The trio also have a self-titled six-song EP from 2020 as well as another full-length album in the box and awaiting release at a later time.

Combine it all and there’s more than enough to fill a gig list.

“There’s no shortage of material,” says Katz-Bohen. “We have a lot of choices. It’s a bit overwhelming.”