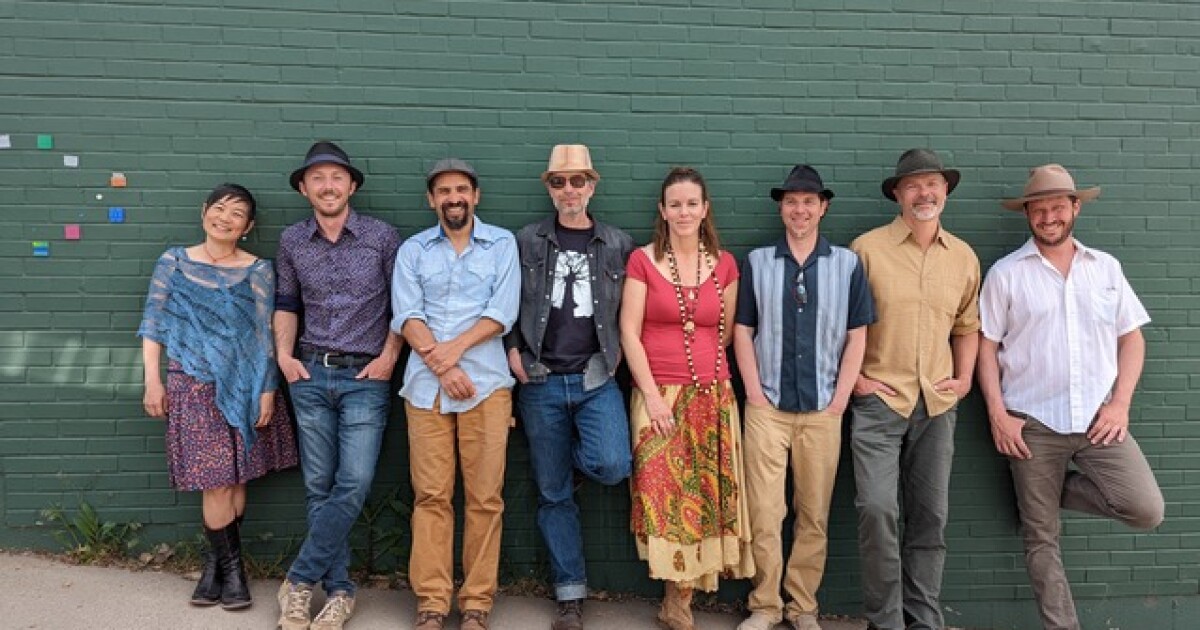 LP McKay, Music Director of KSJD: Hi, this is LP. I’m sitting here with Nicole Carey from Carute Roma. Thanks for joining me today.

Nicole Carey: Thank you for.

McKay: Excellent. Well, we’re here today to talk a bit about the release of your new album. But first, I wanted to see if you could give me some information about the band. I know you have many members and many influences. Tell us a bit about that.

Carey: Yeah, we’ve been together I think over 15 years. It started with only three or four members, probably more than 15-16 years ago. And the core members have been part of it all this time. And we’ve evolved the instrumentation and the people in the band quite a bit. My husband and I joined and he played the double bass and I play the trumpet and I sing. And then we have Robert Aspen, who is a teacher at Durango, he plays the accordion, Lisa Sumi also plays the accordion. Michael Rendon plays the violin, we have Mark Walzer, who is a music teacher at Durango High School, he plays the violin. And, Dave Sacks on drums, Brian Aaron on guitar, they’ve been in the band since the beginning. And, John Breaux on bass, and the band iterations have changed slightly, but the core band has been around for a long time. We were really good friends. We like to play Roma music and offer our versions of traditional covers, and also write our own original music in this genre.

McKay: So, what can we expect to hear on this new album?

Carey: It’s pretty cool to have two accordions and two violins with the songs we made up on this album, however, there will be 12 songs, seven of which are original. And, the other five are traditional covers. Incorporating a bit of a different genre, a song that we went a little disco on, we had a little danceable disco beat. But when we walked into the studio, we all felt like it was unfinished and something different was needed. And I had always really advocated for there to be more of a Middle Eastern vibe. And, so our drummer Dave brought in a lot of requests from me to bring back his doom, which is a traditional Middle Eastern drum. And that’s really, that’s really the track that kind of inspired the way we, we put the song together. And I’m really proud of this song. And we all are and we’re so thrilled. So there’s, there’s a bit of Middle Eastern, there’s a bit of Spanish, we were playing a kind of song based on Cumbia.

McKay: I’m from Texas, you speak my language now.

Carey: And kind of bringing together this idea that Roma kind of represent immigrants, refugees, influences coming from their travels and the oppression or opportunities that they face because they’re not in a homeland . And so these influences are happening all over the world.

McKay: So this album, when can we expect it to come out?

Carey: Well, we have album release parties, two of them, one in Durango. It will be June 3 at the Union Social House. And then the next night, Saturday June 4th, it will be at the Mancos Brewing Company.

McKay: We will also put them on the KSJD website, our community calendar, so people can check them out. Where will it be available, people can’t do these shows?

Carey: Our plan is to make this album available on our website for purchase. So it’s caruterome.com. I also just want to shout out to the Montezuma County fans, because I believe that day is Dolores River Days, June 4th, but we don’t play until five. So I hope people will come and see it. And if you think you want to do both, and maybe you can go to Durango on June 3, so you don’t miss it.

McKay: Impressive. Looks like it’s going to be a great show from what I’ve seen on the internet. It’s going to be very entertaining, so you don’t want to miss it! Thanks again for coming and yeah we’ll see you next time.