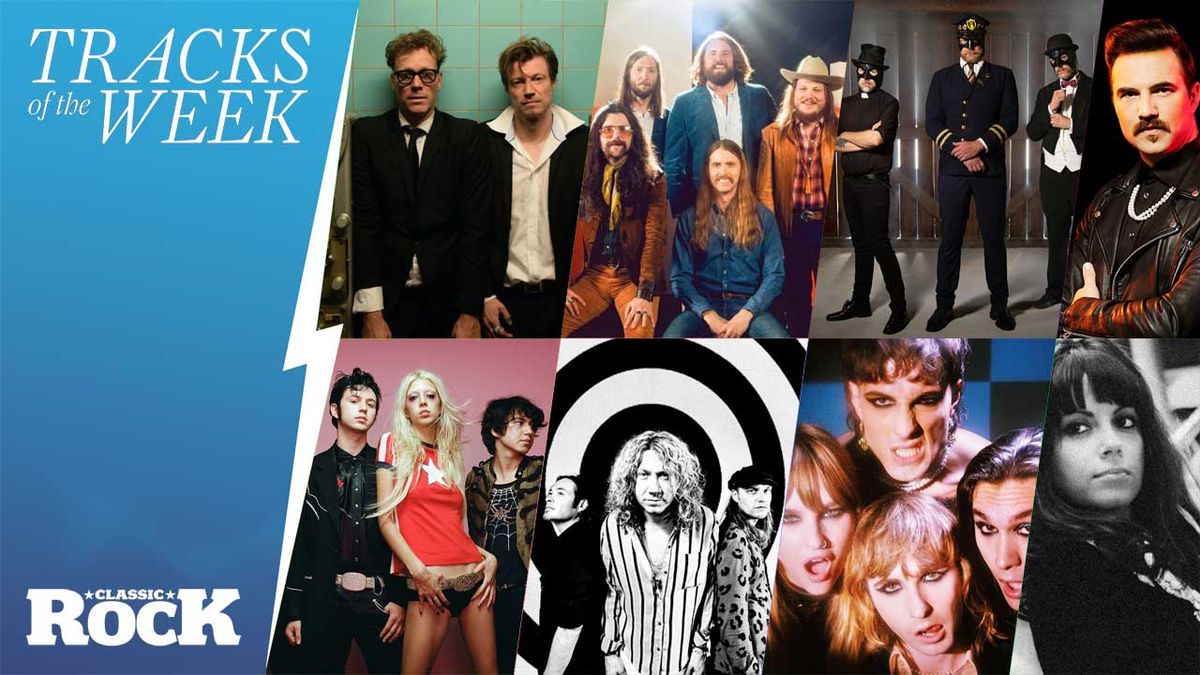 Songs of the week: new music from His Lordship, The Sheepdogs and more

Anyone watch Eurovision? No, neither do we. Apparently it was pretty good.

But not as good, clearly, as our Tracks Of The Week, a roundup of the freshest new music that reaches far beyond the borders of Europe and deep into the far reaches of the rockosphere.

But first ! Congratulations to last week’s winners, the mighty Halestorm, who celebrated their new album’s fall into the UK Top 10 by beating SMKC’s April Fool and Gaupa AR in a race for the top step of the podium.

Will Halestorm win again this week? Well, no, they won’t, because they’re not in the running. But here are the eight titles that are – don’t forget to vote!

His Lordship – Everything by Crank

The brainchild of guitarist James Walbourne (The Pretenders, The Pogues, The Rails) and Kristoffer Sonne (Chrissie Hynde, Willie Nelson), His Lordship plays with the urgency of men being chased with flaming torches and gallons of gasoline. A ram-jam barrage of 50s rock ‘n’ roll mania, laced with punk venom, All assembled (the song and the EP it’s taken from) is one of the most energizing things you’ll hear all year – if you like your energy with a debauched, unclean side of life. Find them on tour across the UK all this month.

When we saw these guys live in London in March, this song had the biggest reception of the night – despite the fact that at that time hardly anyone in the room had heard it. Seriously, everyone went crazy for this track. Listening now to the monstrous, fuzzy ’70s riff that powers it all, it’s not hard to see why. One of the gnarliest dog tracks, in a catalog often characterized by slick, sunny textures, it’s an eye-catching crowd pleaser with dirt under its fingernails and chasing issues.

Moon Martin’s 1978 issue gets a complete overhaul (and spelling change) at the hands of Sweden’s masked pleasure masters and umlauts. A stacked beefcake Marshall, it takes the bare bones of the original and fattens them with beer, bravado and biker leathers. “After 9 high-energy rock ‘n’ roll albums and over 9,000 hours inside our latex masks, we know what Märvel is,” observes the band. “We age like fine wine, but we are as vital as a pack of tigers in love.” Well, absolutely. Their new album, The graces came with maliceis out now.

Royal Republic apparently gets a lot of requests for wedding vows. So far they have refused them, until now. “To make up for all the disappointment we have so carelessly caused to all lovers, we have decided to write you a love song instead!” And so they have, albeit on their own terms of machine gun riffs, dancefloor, raunchy over romance (long-term fans will pick up the 2016 vibes man of the weekend in sound and video). It’s a love song as much as For Some Sugar On Me. As romantic as a big sign that reads “COME GET IT!”. And it’s great fun. Who knows? Maybe ‘will you marry me?’ will be usurped by “are you digging? that more people hear this.

These Los Angeles freakniks have made a name for themselves with blood-splattered live shows powered by slim, strait-jacketed singer Arrow De Wilde – featured in classic rock like what would have happened if Ozzy Osbourne and Patti Smith had had a child in 1975. It was crazy. Unpolished. Exactly what you’d expect from a group of up-and-coming, outgoing rockers. Now a bit older and signed to a major label, they’ve swapped shlock for a rousing burn of Go Gos, Yeah Yeah Yeahs and 70s indie and 90s punk sounds.

“Tome, The treatment is the most bluesy song we have,” says vocalist/guitarist Josh Kennedy, of the Phoenix trio’s whimsical latest single; a lush yet primal marriage of emotion and Zeppelin-infused blues rock warmth. everything the sex appeal in her. It’s a love song about something that’s so good, but so bad for you at the same time. It’s Bella Donna. Their new album, In the nightreleases June 3.

The astonishing rise of Italian glam rockers Måneskin continues. In 12 short months, they’ve gone from surprise Eurovision winners to a band with more monthly streams on Spotify than Metallica and a flagship show at London’s 20,000 capacity O2 which sells out. rapidly. model is more of what got them to this point, with Damiano David’s ridiculously charismatic vocals and a chorus that glistens in 24-karat gold. Two and a half minutes of melodic, arrogant grandeur, and not a second wasted.

1984 premiered on the Veeps live music streaming platform earlier this year, but is now available to the rest of humanity. The first single from the next edition of The Last Internationale TLI 3 album1984 is inspired by George Orwell’s novel and is therefore accompanied by sufficiently powerful lyrics. “No peace when you seek shelter“, sings Delila Paz, as the song crashes and soars around her in a whirlwind of gospel-tinged industrial blues mayhem.”No more lies, hollow / No more graves, shallow / When hate echoes, cattle follow“, she concludes. Ouch!

The popular Egyptian group Massar Egbari will give two concerts in Berlin, Paris on June 3 and 4