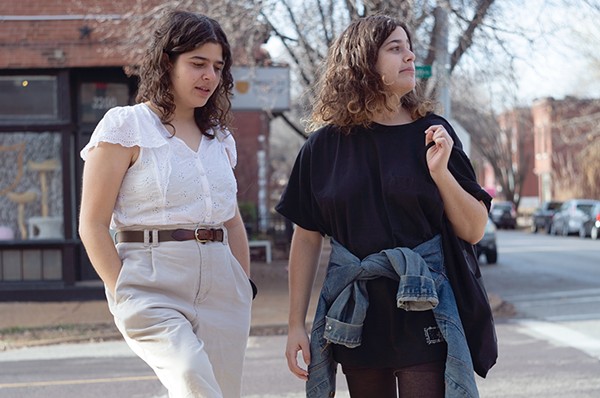 Dubb Nubb started with sisters Hannah and Delia Rainey, but grew to include Todd Anderson and John Hamms.

Dubb Nubb band members can tell you a lot of things, but one thing is for sure: there’s no music scene quite like St. Louis.

A local folk group, Dubb Nubb has been playing in the area for over a decade, with brief breaks to pursue other dreams. Started by twin sisters Delia (who wrote for the RFT) and Hannah Rainey as a teenager, the band now includes sisters plus Todd Anderson on bass and John Hamms on drums. For this journalist, the group exudes freshness and kindness, which seep through the screen as the interview progresses.

Their friendship and mutual admiration is evident from the moment the group begins to talk about each other and their work.

“I think it’s really cool that because of the music scene in St. Louis, I met these two people,” Hannah says, referring to Hamms and Anderson. “Because I never would have known them if it hadn’t been for the shows.”

Originally, however, Dubb Nubb was just Delia and Hannah, two high school girls playing shows at the now-closed Foam Cafe, at various locations on Cherokee Street, or even at a house show, something that doesn’t happen very often in the city anymore due to COVID.

The group eventually gained an extra member when the sisters moved to Columbia for college — another Rainey sister — and had a few other players with them, but they dwindled to just two from 2016 to 2018. During this period, Anderson debuted Dubb Nubb.

Jokingly called a superfan, Anderson played bass while they had Andrew O’Neill as drummer. Delia moved to Chicago in 2018, and for a brief stint Dubb Nubb was on hiatus. Upon returning from Chicago, however, the two sisters began discussing what a full band would look like. Including Anderson and then Hamms was an “obvious choice,” Delia says.

The four “started playing together, and it really clicked,” Delia tells the RFT. Anderson had just returned from Oregon when the sisters contacted him. The Portland musicians, Anderson says, have “great gear, and they look great,” but he didn’t see people hanging out and chatting “and just having fun and goofing off afterwards, so this isn’t was not the same kind of atmosphere [as St. Louis.]”

“…Shortly after I got back and things started to open up again, Hannah texted me and said, ‘We’re going to play a show; do you want to play bass? And I said ‘Yes, please,’ Anderson said. “It’s just a lot of fun, very low rush, and I really like the music.”

Hannah and Hamms had played together in a different band before, but he says this time it’s different – more freedom and it’s fun to work together. The creation of new music usually comes from the Rainey sisters writing separately, bringing what they wrote to practice and playing with it. Once their Monday night practices arrive, the band figures out what they’ll play based on what the Rainey sisters have written, and sometimes superfan Anderson will ask to play a song from 2011. Anderson will suggest the song, or they’ll have fun and try new things.

Dubb Nubb hopes to focus on recording an album this year. They have several shows scheduled this summer – and have already played several times, including their traditional Dubb Nubb Fest, a show the sisters organize each year with their friends – but hope to wrap up later this year and record something.

The sisters haven’t released an album since 2015, and they’re ready to release one to the world. It won’t take long once they get started, the sisters say, and the album that comes out should be like one of their practices – a fun, low-stakes record where they can try new things.

As COVID has challenged the St. Louis music scene with bands breaking up or moving away, Delia says Dubb Nubb is also navigating his new challenges.

“[The music scene] feels like a community, and it feels a bit more scattered now because of COVID,” Hannah says. “We’re trying to figure out how the community works now.”

Hamms says he’s found a home in the scene, saying it’s amazing that you can go somewhere and everyone knows and is comfortable with each other. The scene is “really special, small, cute and nice,” he says.

Find Dubb Nubb this summer at Riverside Time‘ art fair Thursday, June 24. Tickets are $20 until midnight June 22, then will be $25 online and at the door. Learn more here.

BTS Proof: What the album says about the group’s future and legacy