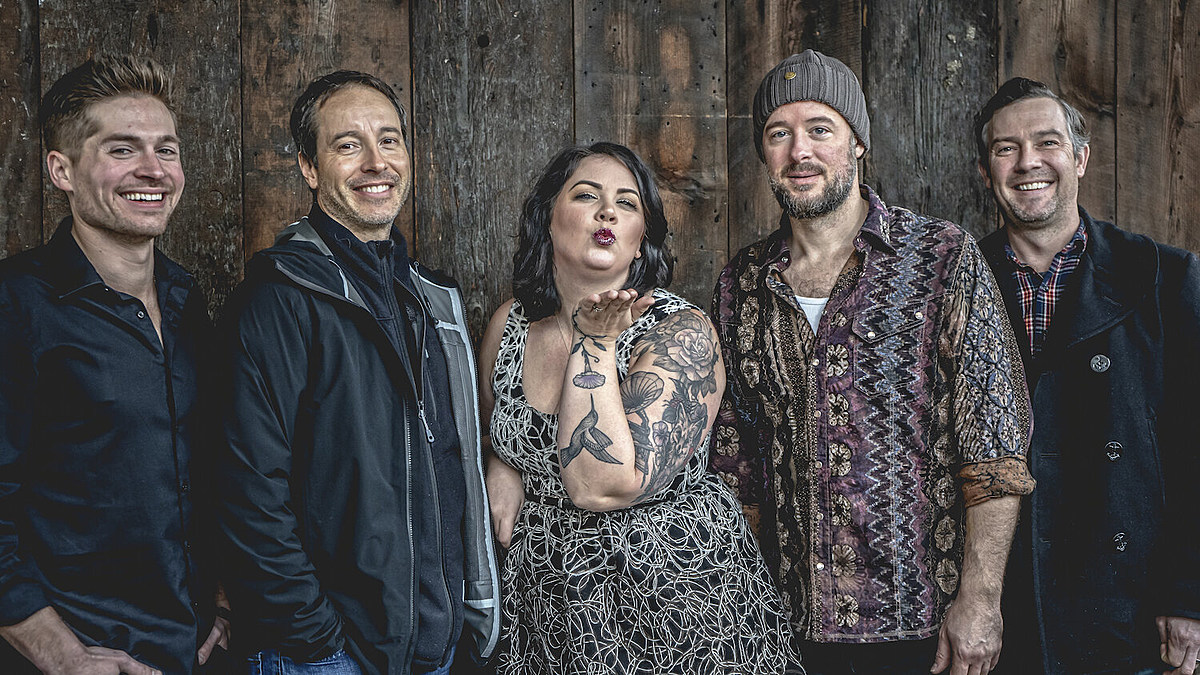 Colorado Progressive Bluegrass Veterans The Yonder Mountain String Band have been working well for almost 25 years, and they are now ready to release their first album in five years, Get yourself outsidethis Friday (02/25) via Frog Pad Records (Pre-order). The group – founding members Adam Aijala, Ben Kaufmann and Dave Johnston, along with violinist Allie Kral (who joined in 2015) and new multi-instrumentalist Nick Piccininn – began writing the album remotely during the pandemic, and eventually reunited at Cinder Sound Studio with co-producer and engineer John McVey, and the long run-up to the studio made for an album that came together like no other Yonder Mountain LP.

“When the pandemic hit and the music touring industry shut down, none of us at Yonder Mountain knew when we would see each other again in person let alone be able to play shows again,” Ben Kaufmann tells us. “Band members are literally scattered across continental United States time zones. And while Covid-19 has interrupted much of our lives, it hasn’t stopped our desire to create. We’ve started sharing new musical ideas with each other during the weekly Zoom These ideas became more complete over the course of a few months and for the first time in Yonder Mountain’s nearly 25 year history, we actually fully pre- produced what was to become Get yourself outside.”

“While with previous studio albums, we allowed ourselves space and time in the studio to write and create,” Ben continued, “the new pandemic realities meant we had to be ready to go as soon as we got the green light to travel. As a result, this new album had a full plan before we were ready to record.”

The album’s 11 songs run the gamut, from fast, happy bluegrass and country ballads to experimenting with other genres like the soul/funk-tinged “Broken Records,” and their dedication to keeping things almost fully acoustic (and no drums) makes this record sound totally authentic and not tied to any specific trend or era. With five members all singing, it’s also full of rich vocal harmonies and lots of lead vocal exchanges, which adds a nice change of pace and keeps things from getting stale. It doesn’t officially come out until tomorrow, but you can hear it all now. A full preview stream below.

The band also gave us a track-by-track breakdown of the set, and you can read it while you listen…

I found a verse and chorus for this song a cappella, while working part-time during the COVID shutdown. I love how this arrangement turned out so much. There’s good dynamics, tight harmonies, stops, offbeat hits and an overall heavy feel. Music has an impact. I think the “vibe” is right, since our lives have been greatly impacted by the pandemic. -Nick Piccinini

This song came together like a few songs that Dave and I wrote together. I showed him some chords and a rough melody and it turned out he had lyrics that more or less matched the music. Dave wrote most of the verses and we did the chorus. On the bus, we used to hear the phrase “I can’t” quite often, and we had fun using it in the song. -Adam Aijala

This one started out as a song about throwing rocks, and it was heavily revised over the course of a year. I finally settled on a set of lyrics while, you guessed it, on a walk with Adam in Bozeman MT. I forget what we were talking about, but by the time I got back to the bus, I had to take the Simon and Patrick and hang out in the back lounge. Nick’s performance is really good and gives an extra dimension to the whole thing. It’s kind of a moody song, so if I sang it, it would be too depressing. Ha ha. -Dave Johnston

I tested positive for COVID at the end of 2020 and while isolating myself in our spare bedroom, I had an idea for a guitar that ended up being the intro for the song. The lyrics and melody I came up with sounded like it could be some kind of love song and how we navigate relationships. I took it to Ben, Dave and Nick on Zoom and we reworked the chorus lyrics and added an instrumental bridge. The song’s upbeat vibe makes me think the outcome for the narrator was good. -Adam Aijala

I wrote the words on this one first. I walked around Portland, Maine one afternoon – either we had the day off or it was before the sound check. It was rainy and cold and gray and I kept going around in circles. Although it is quite simple, it contains some unconventional elements. Nick’s harmony part is fun to sing and so far people seem to like it when we play it live. -Dave Johnston

Dave and I were going to a show in his minivan when I started the first verse of “No Leg Left”. He was kind enough to let me play mandolin in the front seat! The scenery of our ride through Colorado definitely inspired the melody and the kind of old-school fiddle feel I get from the arrangement. Adam’s guitar solo on this one is maybe my favorite solo on the whole album. I really enjoyed hearing how the harmonies came together, and I think that will carry a lot of weight when we take this one on stage. -Nick Piccinini

7. OUT OF THE BREAKDOWN

This instrumental is a demonstration of what comes most easily to me creatively; melody. Adam was there at the beginning to help me work out the chord structure. When it came time to work on pre-production, I asked Ben if he wanted to try playing electric bass instead of acoustic guitar. I had no idea he would channel his inner Victor Wooten there then! Ben’s melody playing has easily become my favorite part of this song, and our audience clearly loves it. -Nick Piccinini

It started like most of my ideas; a melody with a single specific lyric in mind. This song actually marked my very first collaborative effort as Adam, Ben and Dave all weighed in on the lyrics as they took shape. I think if I have a favorite line, it would be: “I’m a boy with a song, it’s barely a sound”. I love the energy of this song on stage. The response from the public makes me think that it is going as I had hoped! -Nick Piccinini

It was in the middle of the pandemic. For all intents and purposes, I had been unemployed for a year and was also going through a divorce. Everything I was writing at the time seemed so depressing. Not that I’m surprised. Life was really hard and deeply uncertain. I had the music for what would become “Broken Records” and although I wanted the lyrics to address some of the things I was going through, I was determined that it wouldn’t turn into a “depressing song”. I remember getting mad at myself, having this internal conversation about how I was just talking about things I didn’t like or wanted. And I pretty much forced myself to flip that script. “Broken Records” is a prayer for myself. Hard times will pass. There are better days ahead. And music, as always, will be my guide and guardian. -Ben Kaufman

I was hanging around with a simple country melody, I think it was “You Are My Sunshine”, trying different chords and ways to rephrase it, and finally came up with something that I kept repeating. I opened one of my morning notebooks and the phrase “I’m going to tell you something I remember” seemed to fit the chords I had. From there, I just tried to repeat that idea and that type of phrase. What I love the most is how the chorus works and how the song filled out in the studio after everyone found their part. -Dave Johnston

I always thought the folk/Americana/bluegrass scene would be like an autobiographical song about skateboarding, the Midwest, and unrequited, angsty teenage emotions and that’s what came out. The band did a great job with the sparse vibe on the final recording and Adam’s vocals do a bit of that brother harmony thing that fills in the choruses really well. -Dave Johnston