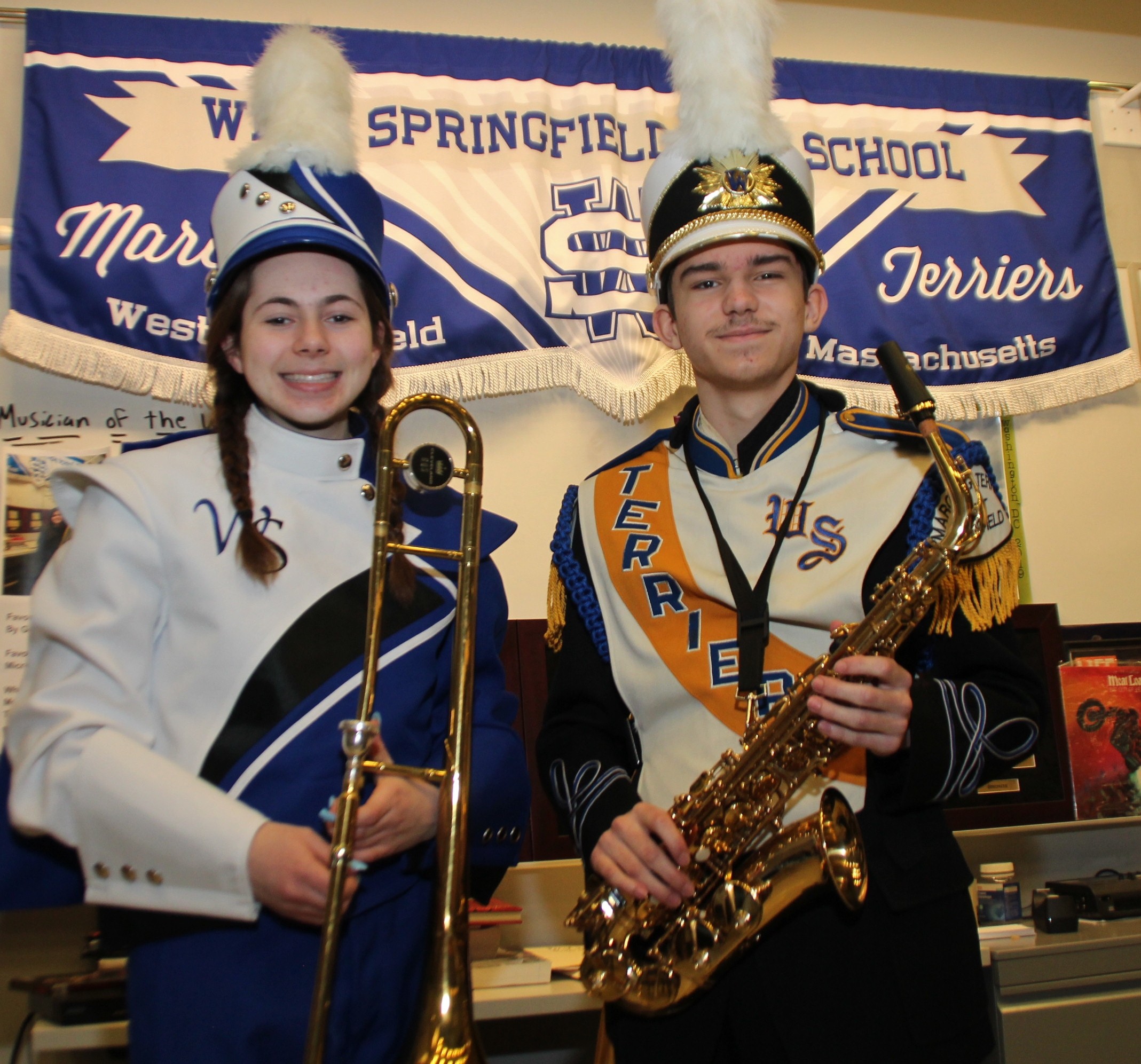 WEST SPRINGFIELD — A black-and-white photo in the music room at West Springfield High School (WSHS) has inspired band manager Nathan Holesovsky since he arrived at the school in 2017. It shows a WSHS marching band from the 1960s on the stairs. of the United States Capitol.

“Those were the band’s glory days,” he said. “They had 100 members. I want to bring back those days.

It is close to this goal. Under his leadership, the number of students in grades 9 through 12 in the music program tripled, from 28 to nearly 85. He said the first group of students “was small but mighty.”

“Since being hired, I have essentially renewed the traditions that made the band so successful in its past: strong, unified marching and concert bands playing exciting and challenging music that students and audiences could follow,” Holesovsky said.

One of the most visible aspects of Holesovsky’s rebuilding program will be seen next fall when the Marching Terriers step onto Clark Field for their first game of football.

They will wear new uniforms in the school colors, blue and white, replacing the black and white uniforms worn for 24 years. Many old uniforms are in poor condition and also missing parts.

Last week, the band members were measured for their new uniforms by a representative from Missouri-based Stanbury Uniforms. The company plans to deliver them by July. Uniform replacement plans began in 2019, but the order was delayed due to the pandemic.

Not only does the group get new uniforms, but group members and parents no longer have to worry about how to pay for them. The school department is recovering the entire $57,000 tab for uniforms from its school choice fund — an account that receives tuition from other cities whose students attend West Springfield public schools.

Holesovsky said the fund can be used for projects such as new uniforms. He added that he and the group are “grateful” to WSHS principal Patrick Danby, school superintendent Timothy Connor, associate superintendent Vito Perrone, mayor William Reichelt, school board members and the Music Parents Association for their help.

The district is ordering 125 uniforms, including 15 color guard uniforms, at a cost of approximately $450 per student.

“When buying new uniforms, it’s important to order 10-15% more than your current band numbers, so you have plenty of extra size options for future kids in the program,” Holesovsky explained.

The new uniforms are a polyfiber blend, which allows them to “breathe” in hot weather and trap air in cold weather. The current uniforms are all wool – and extremely warm, especially in August and September when the band has many performances.

Unlike current uniforms, the new uniforms can be machine washed as needed, rather than needing to be dry cleaned. Holesovsky said that among other benefits, the new uniforms are also easier to put on – a single zipper in the back of the jacket – and the pants ride higher under the jacket.

“I really like that the new uniform pants are adjustable for our different sizes, instead of just one size for everyone,” said junior Emily Gariepy, who plays trombone. “Plus, they’re more comfortable to wear because they have breathable fabric.”

Saxophonist Samuel Blaser, a junior, called the new uniforms “a big improvement” over the current uniforms.

“I love that they match our school colors,” Blaser said.

Drum major Julianna Hoague graduated, so the senior won’t be able to wear a new uniform. “I’m a little sad. I won’t have the experience of wearing it during my high school career, but I’m still thrilled that we’re finally getting some new uniforms.

Junior drum major Kayla Walsh, however, will be wearing a new uniform — and she’s thrilled with it.

“The old ones aren’t flexible in temperature – they’re always warm, even when it’s cold outside, because they’re made of wool,” she said.

“They will be new, so it will give the group a boost of energy. We will look great in our school colors and be ready to do our best,” Walsh said.

Holesovsky is also giving his best to the reconstruction effort. He put on what he calls “incredible shows” for the band, including music from Green Day, Queen and disco music from the 1980s and 1970s.

In addition to half-time shows, the band has participated in concert band music festivals such as the Massachusetts Association of Orchestral and Choral Conductors Regional Festival and the Heritage Festival in Washington, D.C. and in New York.

This season, the band has 85 members, winds and percussion, and 10 to 12 other members in the color guard.

“We are delighted with this growth. I look forward to having a group of 100 members very soon,” he said. Holesovsky added that 100 is the “perfectly sized” group for the high school’s 1,300 students.

Not only has the pandemic delayed obtaining new band uniforms, but it has also added other challenges that have forced the band to do things differently. There were no football games in the fall of 2020, so the band performed a socially distanced performance in the school parking lot, playing 1980s music as their theme.

“I’m proud to say that the marching band played while parents watched from their cars — using horn sounds as applause,” Holesovsky recalled. “During the winter months when we couldn’t go out, we put on two virtual performances that were professionally edited and shared with the community.”
In the spring of 2021, the band performed a Beatles medley on stage without an audience and streamed via the internet.

“The pandemic has been difficult for our program, but I am very proud of the resilience and dedication of our members,” he said.

How to Crossfade and Become a Spotify DJ